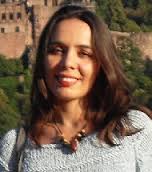 Maribel González is Professor at Pompeu Fabra University. She holds two BAs in Law and Political Sciences from the University of Salamanca, where she also earned a PhD in Law.