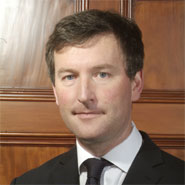 Professor Gavin Barrett is Jean Monnet Professor of European Constitutional and Economic Law and Associate Professor in UCD Sutherland School of Law. He graduated with an LL.B.from the Law School, Trinity College Dublin in 1988, having been made a Scholar of the College two years earlier in 1986.

He completed his Ph.D. studies in 1994 with a dissertation on employment rights under Irish and European law in business restructuring situations. He graduated from King’s Inns and was called to the Bar in 1997.

Professor Barrett is a board member of the Dublin University Law Journal, articles sub-editor of ERA Forum, a referee for the European Law Journal, the European Constitutional Law Review, the Hibernian Law Review and Parliamentary Affairs, and was a staff editor of the University College Dublin Law Review for twelve years, a journal which he played a key role in founding. He is a member of the Irish Centre for European Law, a Council member of the Institute of International and European Affairs and member of the Economic Governance Group, the Eurocrisis Group and the Ireland in Europe Group   and a Fellow of the Dublin European Institute. He has been variously Irish rapporteur for the Fédération Internationale de Droit Éuropéen, the author of commissioned research for the National Forum on Europe, director of a research project concerning the role of national parliaments in the EU legislative order (funded by both the Irish Research Council for Humanities and Social Sciences and the Department of Foreign Affairs),  the Irish expert in major European-wide study of the implementation of Community employment law directives, the author of research on the employment rights of people with disabilities and the co-author of a major report on the implications of the June 2008 ‘no’ vote to the Lisbon Treaty which was commissioned by the Joint Oireachtas Sub-Committee on Ireland’s Future in the European Union. He is currently involved in two international research projects investigating the roles of national parliaments in the European Union, one examining the absorption of EU law into national constitutional systems and one looking at national adjustments to EMU membership.
Professor Barrett’s views have been cited by the House of Lords EU Affairs Committee, Oireachtas Committees and his work cited by the German Bundesverfassungsgericht in its famous Lisbon judgment.
Professor Barrett has lectured in the law of the European Union at undergraduate level since 1999. At LL.M. level, he has lectured in a variety of subjects including European Union Constitutional Law, Litigation in the European Union, the Social and Employment Law of the European Union, Eurozone Law and the Internal Market law of the European Union, He has also taught on the Law School’s Diploma in Employment Law, in the Dublin European Institute and for the Law Society of Ireland.